What you Need to Know

Traveling with a firearm is complicated. There are many rules and regulations governing the carrying of a gun onto a plane, and for good reason.  A locked gun case and declaring the firearm upon check-in are just a few of the imperative rules that must be followed. So if you’re traveling with a gun, there are a lot of important things to know about proper storing, packing and transportation of the gun through the airport.

How Should I Pack My Gun? Can I Bring Ammunition on the Plane?

This is actually the most crucial part of traveling with a gun, as the TSA has many requirements for the proper packing of a gun. Ammunition and firearms are not allowed in carry-on luggage and must be checked. Guns must be packed in a hard-sided container which can be (and must be locked) locked. The key for this lock must remain in your possession at all times.   Firearms are to be unloaded, including any stray bullets that may be left in the chamber. If you forget to do this, the gun can be taken away and a stiff fine may be assessed.

Different airlines and airports may have slightly different rules regarding the safe packing of a firearm and its ammunition, as well as the legality of traveling there with a gun in the first place, so be sure to read the airline’s policy carefully.

What Kind of Gun Case and lock do I need for air travel?

According to regulations , your gun case can be integrated with a lock or you can use a case with a separate lock.  Do not use TSA approved locks for your gun case. 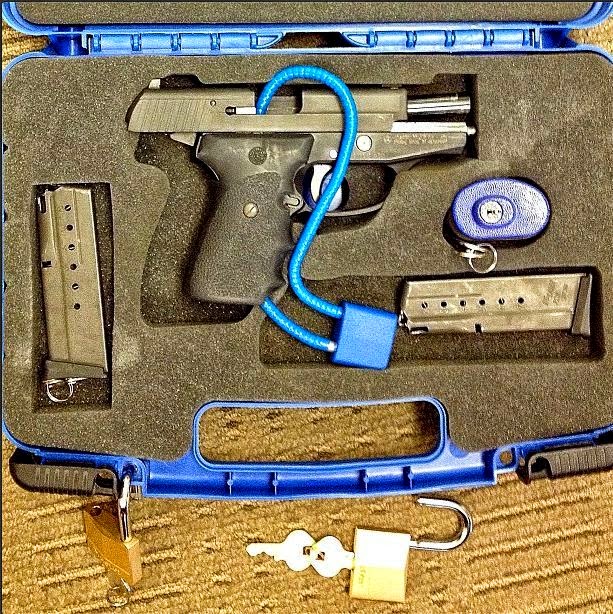 TSA approved locks compromise the security of your firearm.  Remember, the law states that you ALONE maintain possession of the keys to your gun case.  The TSA requires a hard sided, lockable case: this Pelican case comes highly recommended (remember to get heavy duty locks for it) if you are traveling with a pistol. If you are traveling with more than a pistol, we recommend this case for rifles  and this shotgun case (with capacity for two) for shotguns.

Below are our recommended TSA approved gun cases:

Error
You are trying to load a table of an unknown type. Probably you did not activate the addon which is required to use this table type.

The first thing to note is that curbside check-in with a gun is prohibited at all airports and by all airlines. The firearm must be declared upon check-in at the ticket counter with gate agents. When you do this, be prepared and patient. Security may have a couple of extra questions for you, and they are within their right to search your bag if they deem anything suspicious. There will be a declarations form to fill out. Security may also need to check the case itself to ensure proper storage and locking of the firearm and its ammunition.

U.S. law says that “No common or contract carrier shall require or cause any label, tag, or other written notice to be placed on the outside of any package, luggage, or other container that such package, luggage, or other container contains a firearm.” Do not put any sort of label on your luggage that says there is a firearm inside, and TSA is not allowed to do the same. Be sure to check your carry-on bag for any bullets, gun residue or other material which will not be allowed through security.

If you are a member of law enforcement, there are different rules by which you must abide. Simply being one doesn’t allow you to fly with a firearm at all times; there must be what the TSA refers to as an operational need for you to have it. This means that you have to have been assigned to protective duty, a federally employed officer, or transporting an in-custody prisoner. If you are retired, do not have general arrest authority or are employed by a law enforcement agency that is not fully funded by taxpayers, you cannot fly on the plane with a firearm, and are subject to all the rules applied to regular civilians.

What Happens If I Forget About a Gun In My Bag?

This depends on where you are. If you’re traveling through Texas, you’re in luck, as they’re pretty lenient with travelers accidentally bringing a gun through security in their carry-on luggage. But everywhere else, the TSA has a very thorough process to determine whether it was actually an accident that you had a firearm in your carry-on.

Many times, there will be a brief interview, after which a citation will be assessed and you’ll likely still be able to make your flight. But, if anything seems off to them; the way the gun was packed, whether or not it’s loaded, if you have extra ammunition in your case; then you will be in a world of hurt. There could be a large fine, you may be sentenced to jail time and that interview process will be thorough and time consuming. They will treat you like a criminal looking to carry out a crime on an airplane. You will have to prove your innocence.

But having to sit through all of those questions and the likelihood of missing your flight is by far the least of your concerns in this situation. The TSA can fine someone up to $11,000 for taking a handgun in their carry-on through security, even if it was just an innocent mistake in the carrier’s mind. The TSA gets rather irked by people who forget about their handgun in their bag, which likely caused them to give out stiffer penalties for the mistake, no matter how innocent it may be. The traveler bears all of the responsibility when it comes to traveling with a firearm.

*Featured Image By M.O. Stevens (Own work) [CC BY 3.0 (http://creativecommons.org/licenses/by/3.0)], via Wikimedia Commons

Last Updated on 5 years by tsatips