Tips for helping You Plan Your Spain Family Vacation

Are you considering Spain for a family vacation? As one of the most family friendly destinations in the world, it’s a country that children of all ages (and adults of all ages!) will both fall in love with. Many say that the two great loves of Spaniards are children and food. After having travelled to Spain with kids on multiple occasions, we wouldn’t agree more. This Spain family travel guide will help you figure out where to go, when to go, where to stay, what to do and give you many useful tips for traveling to Spain with children.

Where to Travel in Spain

As the largest country in all of Southern Europe (and the fourth largest in all of Europe), Spain is large and there are many different areas you can travel to. So where should you take your family? Southern Spain? Basque Country? The Costa Brava? There are many major cities and incredible regions of the country in Spain that are popular travel destinations, including:

So what should your Spain travel itinerary include? It depends on the time of year you go, what you are looking to do and how much time you have. Are you looking for laid back beach towns? Are you looking for foodie destinations? Do you want to see the works of famous artists like Gaudí, Picasso or Dali? If you are traveling with children, the other thing to consider is the age of your children. When you are traveling with young kids, it’s very hard on them to move around and change locations too quickly. Protip: Consider staying a minimum of 3 days wherever you go if you are traveling with young children. Other important things to consider when planning a trip to Spain with children is how long is your family vacation going to be for? What kind of budget do you have? Without knowing all these factors it’s impossible to give you a specific Spain family travel itinerary hopefully this Spain family travel guide can help you make your decisions.

We can say after traveling to Spain (on five different trips so far), our top three Spanish cities to travel to are:

1. Barcelona. There is so much to do in Barcelona, including beautiful beaches, water sports, museums and aquariums for the kids, delicious food, trendy shopping, and overall a very friendly and safe environment. You can read more about Barcelona on our post covering Barcelona travel tips for families but absolutely Barcelona has something to offer everyone. Any Spain family travel guide isn’t complete without an endorsement for this wonderful city. 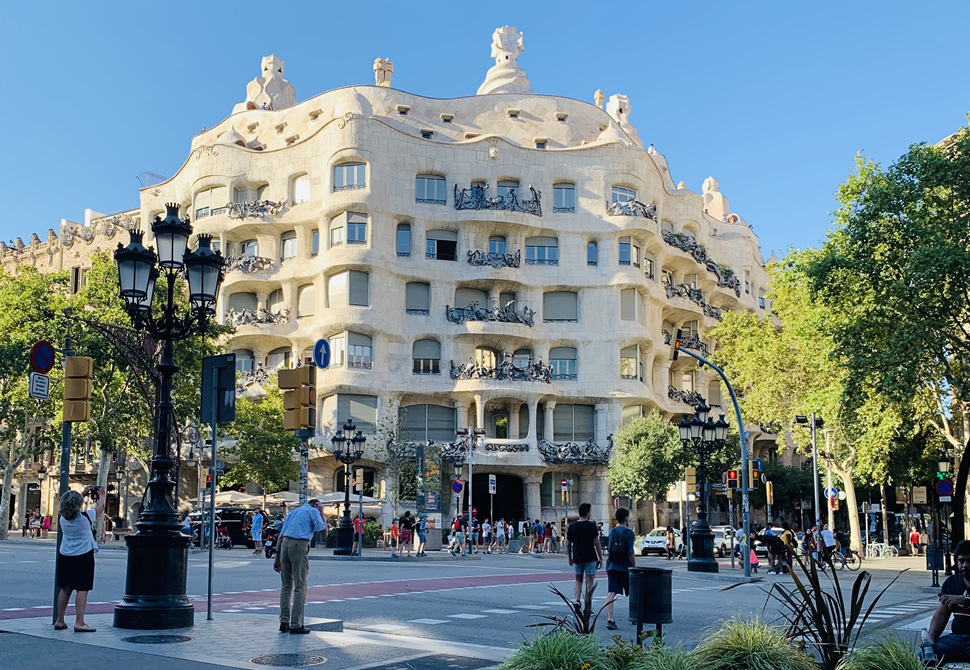 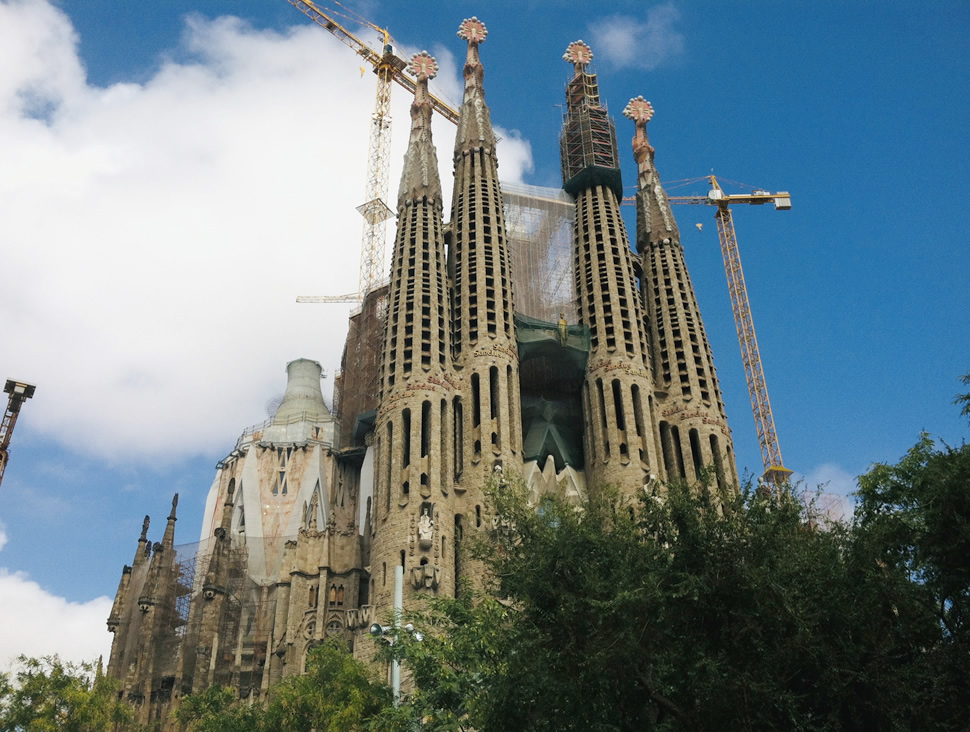 Sagrada Familia: Construction started in 1882 and is still going!

2. San Sebastian (or Donostia to the Basque people) is one of our favorite places to travel to in the world. If you are a foodie, this place should be on your Spain travel itinerary. San Sebastian has the 2nd highest number of Michelin star rated restaurants per square meter in the world (second only to Kyoto, Japan ). And it’s not just the upscale restaurants where you will find incredible eats. The Parte Viaje (Old Town) is loaded with restaurants and pintxos bars as you walk through narrow little streets where you will find some of the most incredible bites you will ever have if you go to right places. Such as the braised veal cheek pintxo from Borda Berri. For around $5 you get an incredibly tender piece of veal that has been slow cooked in a red wine sauce and will just fall apart with a fork. I would highly recommend a pintxos food and wine tour while you are here.  Aside from the food, San Sebastian also has beaches the whole family will love. La Concha Beach is right near the Parte Viaje and is simply beautiful. 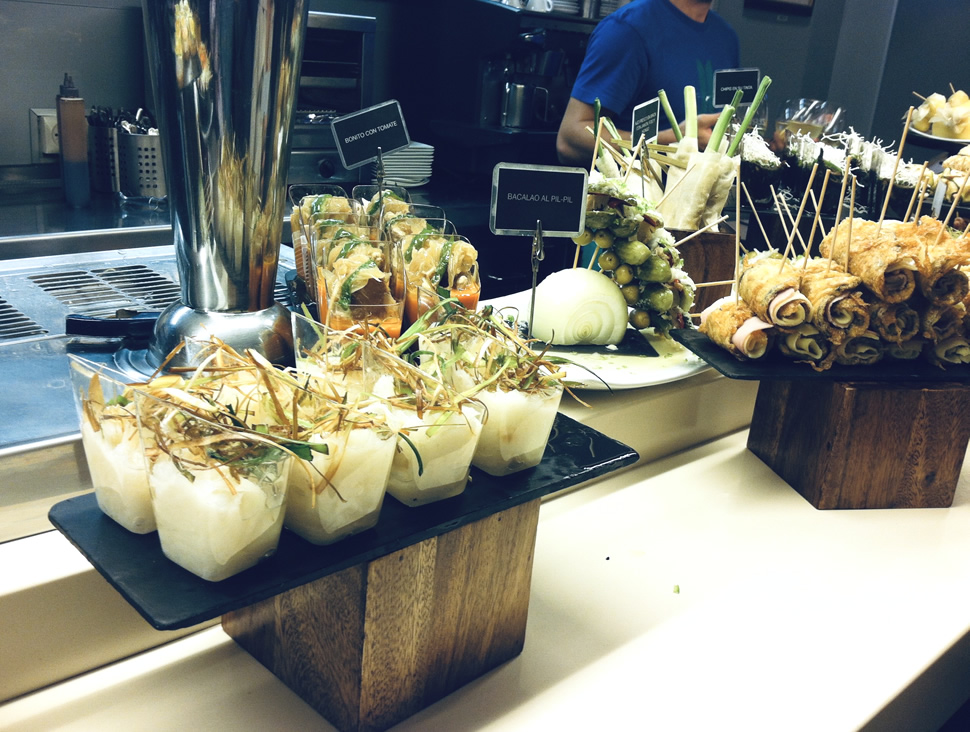 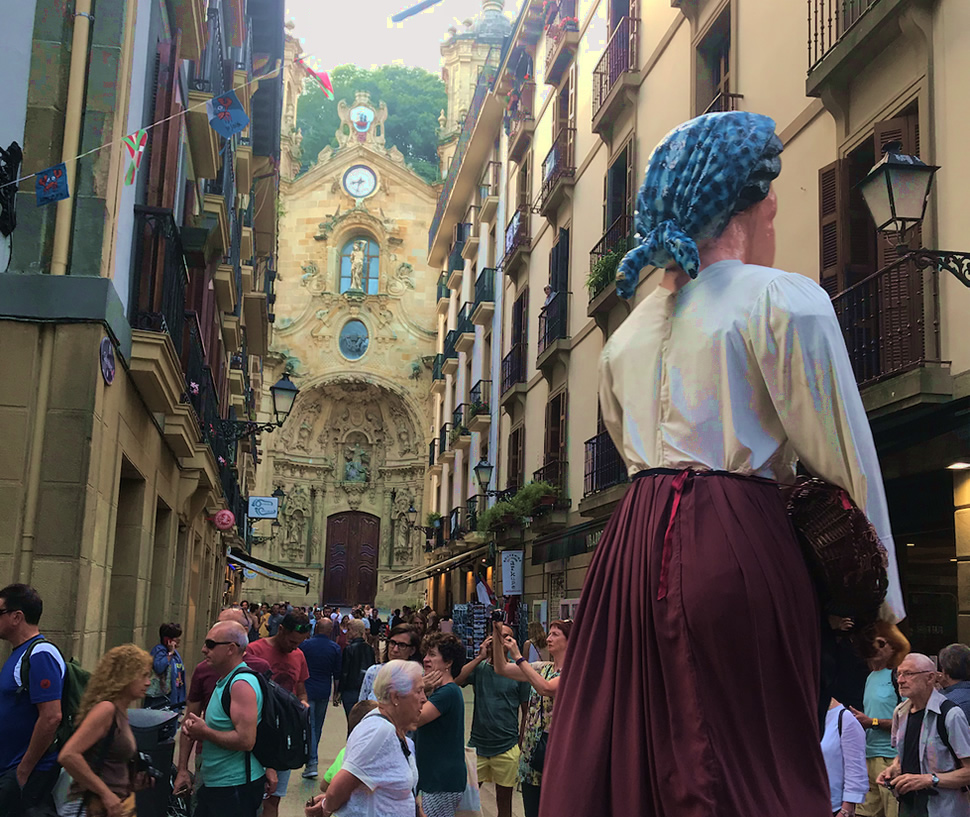 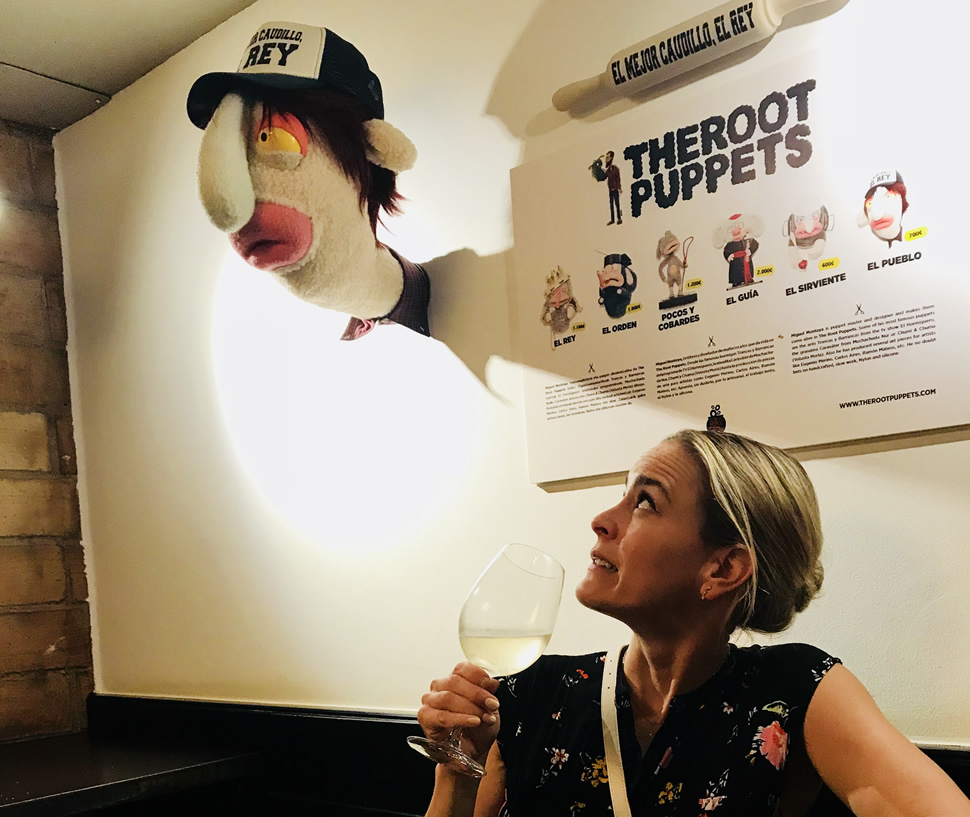 3. Tossa de Mar: This small seaside town on the Costa Brava is about 1 hour north of Barcelona and sits on Catalonia’s Girona coast. Temperatures are great year round and this tiny town is beautiful, filled with narrow, cobblestone streets, an Old Town (called Villa Vella) filled with lovely restaurants and a 14th century castle perched on a hill overlooking the ocean. The coast around the city is perfect for taking a boat tour, simply renting sea kayaks from the beaches or doing some snorkeling in the clear and incredibly warm waters. 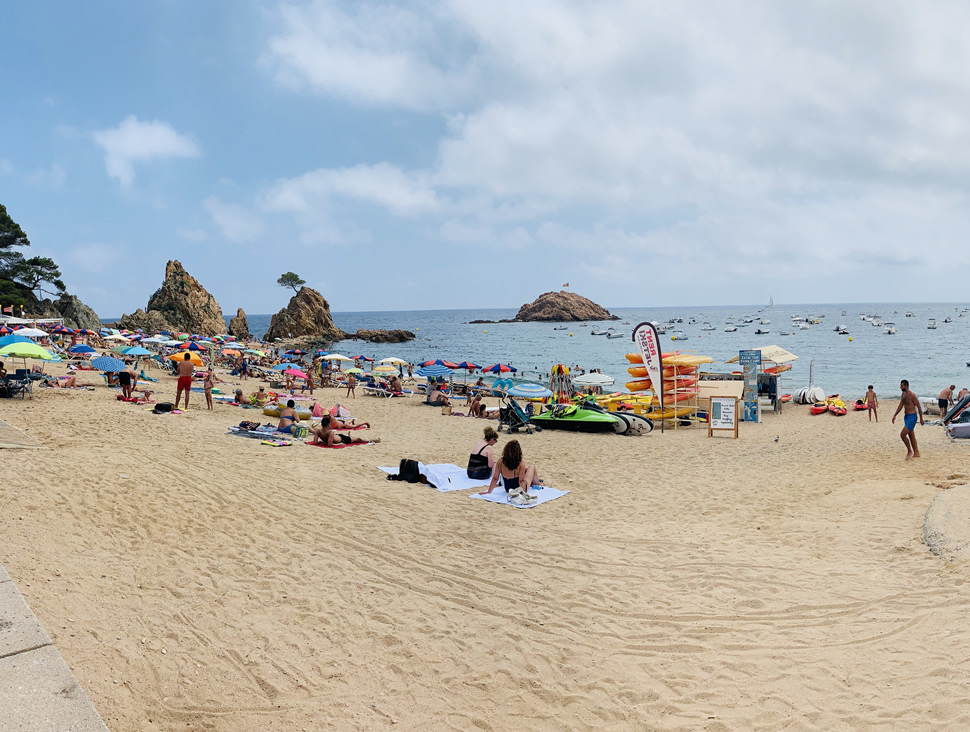 Beach in Tossa de Mar (just 20 steps from our hotel) 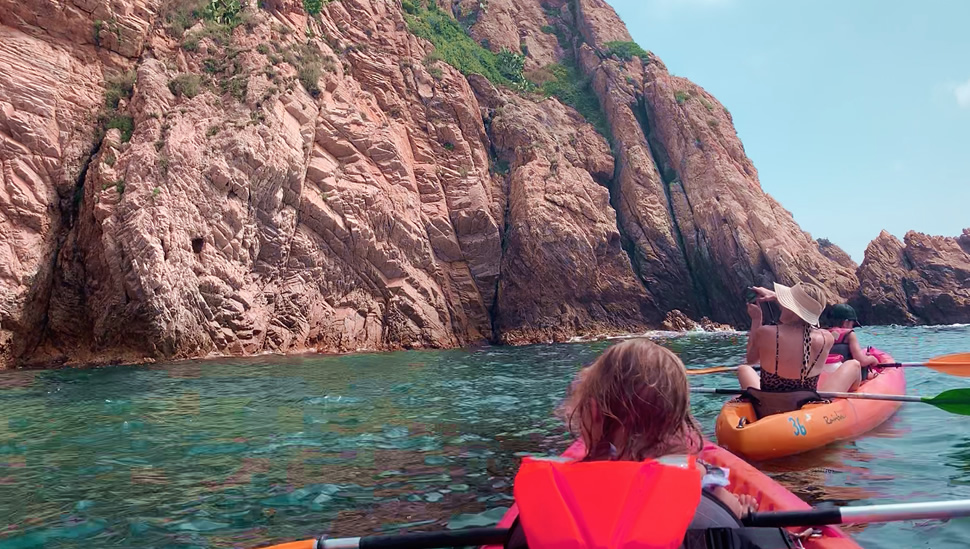 The kids loved taking kayaks out in Tossa de Mar 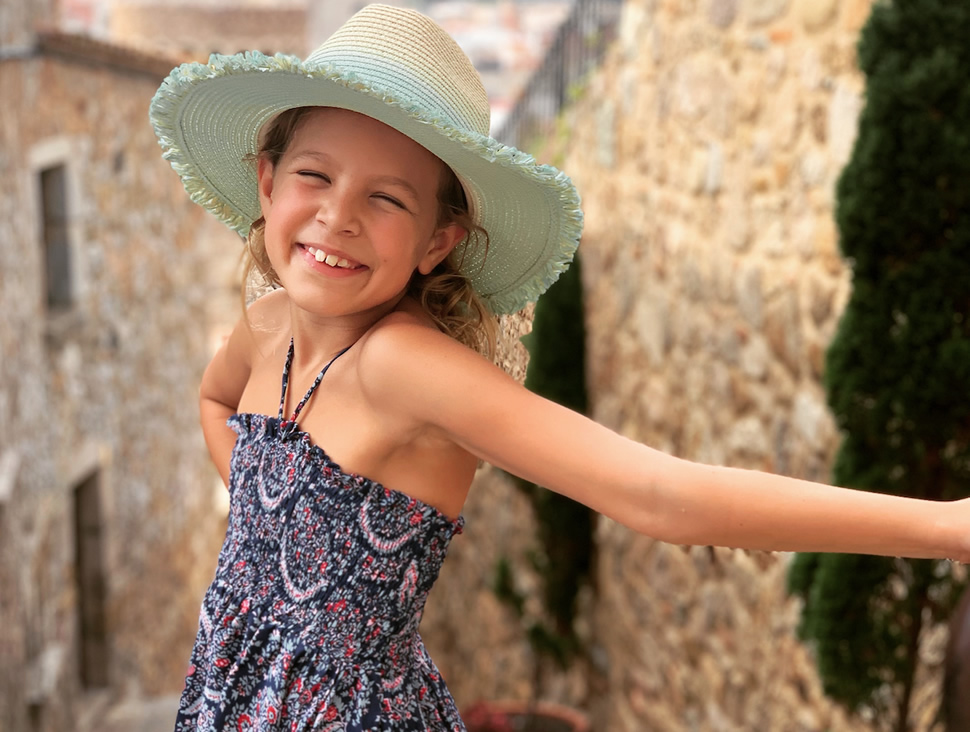 Walking the cobbled streets of the city 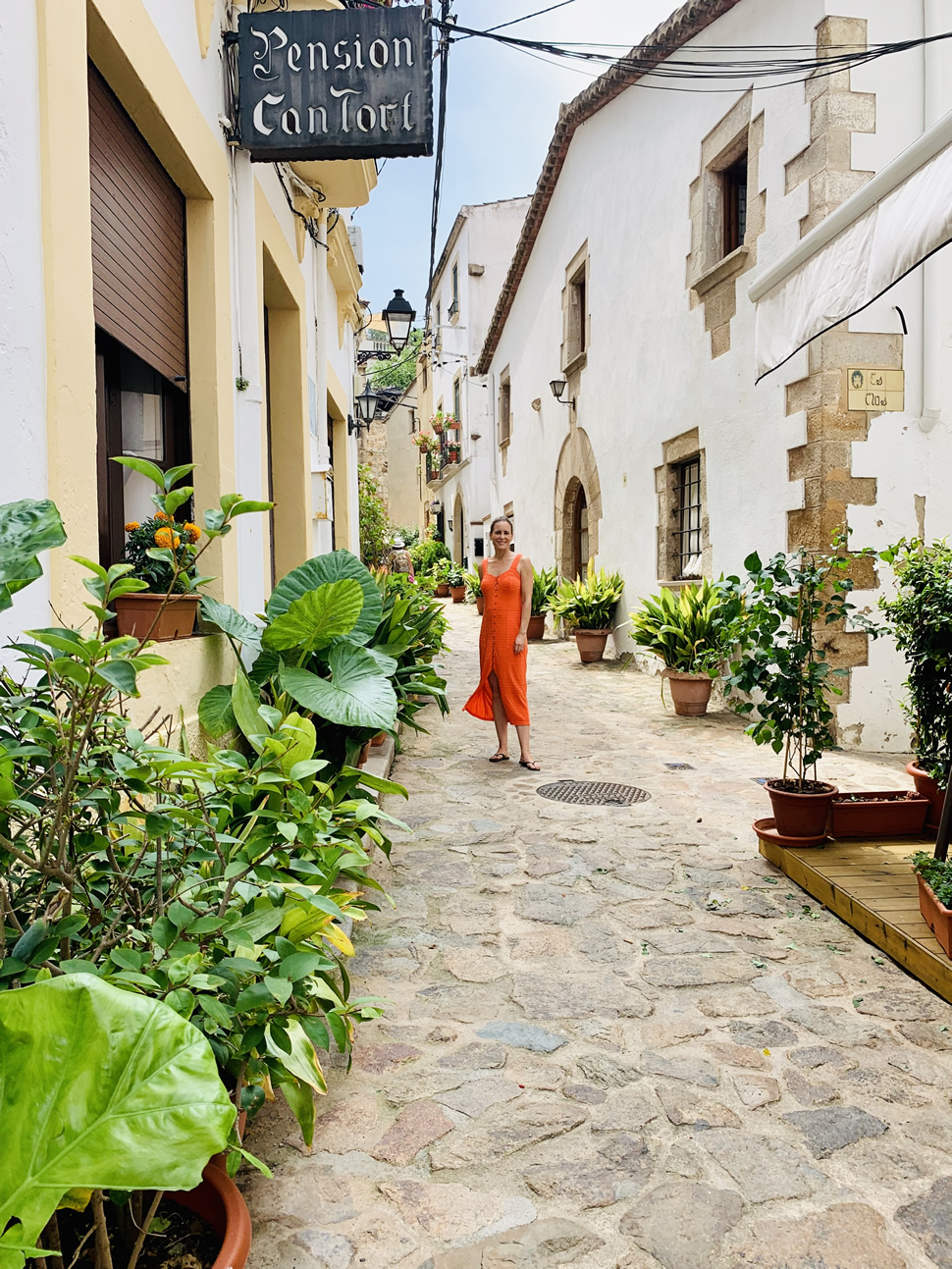 When to Travel to Spain

Where you go will also depend on what time of year you go to Spain. July and August are the hottest months of the year. If you are traveling during this time, you should be aware that in certain areas of Spain the weather can get really hot. For example, Sevilla temperatures can reach 100° or higher in July or August. Coastal cities are quite a bit cooler during July and August. For example, as you can see in the table below, Barcelona in July averages 73°-84°. No complaints there!

Iberia Airlines is the national airline of Spain, although most major air carriers fly into the major cities in Spain, including Delta, American, United, Air Canada, Air France, Tap, Lufthansa as well as others.  If you are wanting to fly into Bilbao to vacation in San Sebastian, your options are trimmed down considerably. Use Google’s flight ITA matrix search to find the best prices and best times to go.

Getting around in Spain is fairly easy no matter where you are. The national rail system, called the Renfe, is often the best way to get from city to city. The high-speed train is called AVE (Alta Velocidad) and it connects all major cities. The AVE takes around 2 hours and 30 minutes to take you from Barcelona to Madrid. Not bad considering that is just over 300 miles. Obviously this is a much better option than renting a car and driving which would take around 6 hours. That trip on the AVE for example would cost around €50 per person.

Like other larger countries, there are subways (metros) in Spain. Metros are located in Madrid, Barcelona, Sevilla, Valencia, Malaga and Bilbao.

Depending on what your Spain travel itinerary is, renting a car may be something you need to do during your vacation. Apparently, Spanish law requires non-EU driver’s license holders to have an International Driver’s Permit (you can get this through AAA) but we rented a car during our trip up the Costa Brava and Girona and nobody asked us for this card. However, just be aware of this if you plan to rent a car so you can plan in advance. You can apply on the AAA website here.

While you are probably accustomed to taking Uber and Lyft for ride sharing, Lyft doesn’t currently operate in Spain and Uber only operates in Madrid. While in Barcelona, we used Cabify. As anywhere else in the world, taxi drivers do not care for any of these ride sharing companies.

Taxi drivers are generally very pleasant in Spain. Of course no matter where you are in the world you can have a shady taxi driver, our experiences have always been good and price has always been reasonable. It is not customary to tip taxi drivers in Spain.

Ideas for Things to Do and See in Spain

Frequently Asked Questions About Traveling to Spain with Children

What are the car seat laws in Spain?
There are currently two regulations used in the EU for child car seats. The ECE R44/04 (older and out of date safety standards) and the ECE R129 (“i-Size”) which is the newer set of standards introduced in 2015 to help improve child safety.  i-Size uses a child’s height to determine the proper seat to use (as opposed to their weight). Currently in 2020, these two laws co-exist so if you bring your own child seat from a different country, it does not have to be i-Size certified. Here’s what you should know though:

When visiting Spain, should I bring car seats from home or rent?
I’ll start with the cons here for bringing your own car seat. Bringing your own is more difficult, as it adds to amount of luggage you are bringing. Our rule is to travel as light as possible when traveling as a family internationally and this breaks that rule. The reasons for bringing your own car seat? For starters, it will save you money (this typically ranges from $5-20 per day depending on what car rental company you rent from). Additionally, the odds are that your child car seat will be much more comfortable, safer and overall higher quality than what you get when you rent. Last, if you are using taxis for transportation, you will probably be waiting longer to find a cab that actually carries a car seat as not all taxis have one. So, you just need to decide what makes the most sense for you and your kids.
Are restaurants kid friendly in Spain?
As a country that loves both children and food, the restaurants all across Spain are kid friendly no matter what part of the country you are in. We’ve taken our kids to many restaurants in Spain and and have never had any problems at all. Even high end restaurants are kid friendly. We’ve taken kids for example to two Michelin star restaurants (Mugaritz and Martin Berasategui) and in both places we were warmly received. Just be sure to bring entertainment for your kids (iPads, headsets, coloring books, etc.) if you do end up going to any restaurant with tasting menus and multiple courses.
Where is the best place to go in Spain for families with young children?
The best place to go in Spain for families with young children is Barcelona. It has so much to offer children of all ages, you can’t go wrong by choosing this amazing city. You could stay in Barcelona for 1-2 weeks and still not have time to explore all the Barcelona has to offer. Truth be told, there is no one single “best place to go in Spain”. So don’t just visit Barcelona if you are coming to Spain for the first time.
Where many days should I stay in Spain for?
If possible, you should try and stay for at least 2 weeks in Spain. There is so much to do and see in this beautiful country.

Tips for People Traveling to Spain with Kids